The eldest daughter of Father of the Nation Bangabandhu Sheikh Mujibur Rahman, Honorable Prime Minister of the present government of the People's Republic of Bangladesh, Sheikh Hasina was born on September 28, 1947 in Tungipara, Gopalganj. In 1966, when the construction work of the first floor of the building was completed, Sheikh Hasina started living in this room. This room is located on the north east of the house (this room is first to the staircase with an extended new staircase). The entrance and exit of the house was the back (north side) of the stairs leading to the kitchen and on the front (west side) with the main stairs. There is a small dressing room and a bathroom with the bedroom inside. On 15 August, 1975, the killers smashed the room along with other rooms. After getting back the building on June 10, 1981, Sheikh Hasina placed some photographs of the disgraced house of that day. Those photographs have been arranged in front of the house wall in the drawing room and on the east wall of dining. At present, this room is also locked. This room has not yet been opened for the visitors of the museum.

This room on the first floor was a dining space and family setting room. To enter this room, at first, there is a dining table where the father of the nation and the other members of the family used to eat food. In this room,Bangamata personally served food to Bangabandhu, his family members and the visiting guests. Jugs, glasses, plates, tea cups, spoons, knives and other accessories used by Bangabandhu and their family members are still visible in this food table. In this room, still there are Begum Mujib's hand-made pickle jar and other things. In this room, Sheikh Russell's favorite two cycles and a coke bottle are displayed. There are some raw rice in a tin.

On 15 August 1975, when the violent killers killed the other members of the family including the nation's father, the house and the lancet were destroyed with the fire of the killers. Even today the marks of bullets are still visible in this room. The rooms of this house had been looted by the killers. The two daughters of Bangabandhu took pictures of the looted house after six years. The pictures are shown on the walls.

There is a dining room with family conference on the western side of the first floor. There is a door on the south side of the room, which is connected to the passage of the main staircase. There is a room with cooking equipment and a small warehouse adjacent to that room. In this room, Begum Mujib occasionally used to heat food and light breakfast. Tea was also served from this room. There is a narrow passage to the north of the drawing room which stretched up to the west wall where there is a door through which you can enter the room.  At present, three doors of this room are closed. The doors are not opened for the visitors.

Even today, the wall of the eastern side displays the spots of blood and the bullet marks (covered with glass) thrown by the killers. The dried brain and some hairs (covered with glass) of Sheikh Jamal or Sheikh Russell are displayed on the roof. The blood spots are seen on the dressing table, desk table, table, reading table of Bangabandhu and on the betel vase of Begum Mujib. In this room the killers operated the brutal killings. A letter has been preserved in this room sent to the address of Bangamata.

After August 15, 1975 assassination, at first the assassins and then the military occupied the house. After six years, on June 10, 1981, when two daughters of Father of the Nation, Sheikh Hasina and Sheikh Rehana got the house back, every room was dark, full with spider's net, dust, and insect and all the things in the house were destroyed due to negligence. In the dressing room closet beside the bedroom of Bangabandhu, the clothes were found in torn and warm eaten. Things in other rooms were found disordered. The signs of plunder of the murderers were found everywhere in the house.

After getting back their home Sheikh Hasina and Sheikh Rehana cleaned the house with their own hands. That memento can be taken from the voice of Sheikh Hasina.

" One day, I'll turn the house into a museum. Before doing so, the house is needed to be cleaned. It's very difficult to console the mind. It is difficult to make understand how painful it's to touch the things of the house. Only those who lost everything in such a way would realize the intensity of grief. My mother was very neat and clean. She used to keep everything in the right place. The winter clothes are set in a cupboard, and the warm clothes are in the other. She used to keep clothes, slippers and shoes everything in order. …………..

All of the things beautifully decorated with my mother's hands are now plundered in the hands of the monsters. Adjusting the mind with this painful situation, I started cleaning the cells with bucket filled with water, soap, cloth and broom. It was so dirty that it took five to six hours a day. I worked five to six days to clean up a room. I tried to keep things as clean as my mother did with her own hands. I cleaned the dirt with own hands and cried for the departed souls. I thought and thought how wretched I am! I am wondering that this is the reason why I survived.  How unfortunate I am! Everyone has left. I am the unfortunate daughter is just hanging in my tears and working on the anguish of pain. Sometimes I felt suffocated with the pang and pain. I stopped working and used to cry a lot for a long time. Once again I used to strengthen my mind ............ I did not dismount any dirt. I kept the dirt in big polythene bags. I don’t know why I could not throw the dirt away. It seems everyone is here, they have just gone out and will back again……………… 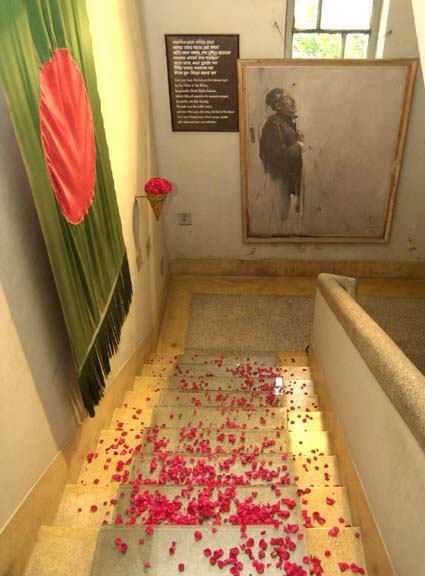 The murderer lancer Mohiuddin was in front of everyone. Seeing the undaunted Bangabandhu, the murderer Mohiuddin scared away. Bazlul Huda and Nur Chowdhury, ordered him to go away,and fired to death Bangabandhu, the father of the nation. With the death of him the bright sun of Bangla goes down. On this staircase, the country's map of red and green, the green fields, the crops, the river and the sea have been stained with blood. They did not stop by killing Bangabandhu, theycalled on a senior photographer, Ziaul Haque of Bangladesh Television to take pictures of the dead body of Bangabandhu to make believe the people of Bangladesh that Bangabandhu is dead. All day long, the dead body of Father of the Nation remains on this staircase. These stairs are still carrying the blood of father of the nation which is now covered with glass and the bullet spots on the wall are also covered with glass. Pakistani occupation force arrested the Father of the Nation Bangabandhu Sheikh Mujibur Rahman in the first hour of 26th March, 1971 and took him through the stairs. On that day, the Pakistani occupation army could not kill Bangabandhu, but with the support of anti-liberation clique, some politicians and high ambitious army officers materialized the worst and brutal killings in the history to satisfy their ill motive of grasping power. 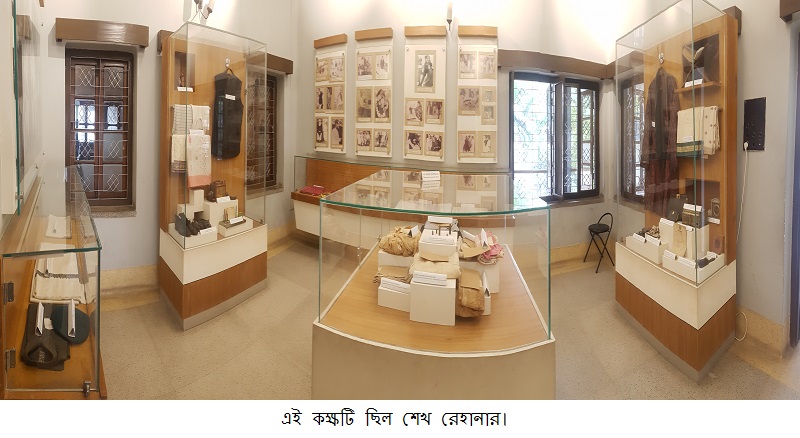 Sheikh Rehana, the youngest daughter of Father of the Nation Bangabandhu Sheikh Mujibur Rahman, was born on September 13, 1957 in Tungipara, Gopalganj.  The historic large open verandah of Bangabandhu is attached with Sheikh Rehana's bedroom room in the south. On 15 August 1975, the assailants plundered and demolished this room. However, Sheikh Rehana was not at home at that time. Only 15 days earlier on July 30, 1975, she went to West Germany with her elder sister Sheikh Hasina. West Germany was Sheikh Hasina’s husband, Dr. Wazed Mia's work place. So they survived two fortunately. This room is now known as Sheikh Rehana Exhibition Gallery. This gallery shows some photographs of the family and political life of the Father of the Nation. In the middle of the room, the glass box displays the wearing blooded garments of Bangabandhu Sheikh Mujibur Rahman, Bangamata Begum Fazilatunnesa Mujib, the youngest son Sheikh Rasel and younger brother Sheikh Abu Naser of 15 August 1975. This room also shows Bangabandhu's glasses, the bullets and shells of bullets of the killers. In the box on the north side of this room, there is a gifted boat symbol written "Joy Bangla" of Begum Mujib along with two saris and Juba Kusum. The famous Mujib coat (Waist coat) of father of the nation,  favorite Erinmo tobacco pipe, pipe vase and other equipments used by family members are shown in  this room. In the box on the Eastern wall of this room the wedding saris of Sultana Kamal Khuku and Pervin Jamal Rozi, the two daughter-in-laws of father of the nation are shown. Bangabandhu’s pajamas and Panjabi  are also shown on this wall.

In the glass box on the south side, Bangabandhu’s Gown, Sandel and Begum Mujib's Sandel, surmadani, bullet shot betel leaf vase are shown. There are also the small pocket Quran and the big Quran Sharif Bangabandhu. While staying in the prison father of the nation used to keep this small Quran with him. There are some other utensils used by them.

On the western side, there is a letter written by Bangabandhu to his wife while he was in the jail. Photograph of coffin in which Bangabandhu's body was carried from Dhaka to Tungipara is shown here. Photograph of graveyard of Bangabandhu in Gopalganj Tungipara, photograph of Banani graveyard where other family members were burried. Black and white photograph of the bullet shot dead body of father of the nation, Bangabandhu Sheikh Mujibur Rahman is hung on the wall of stairs. 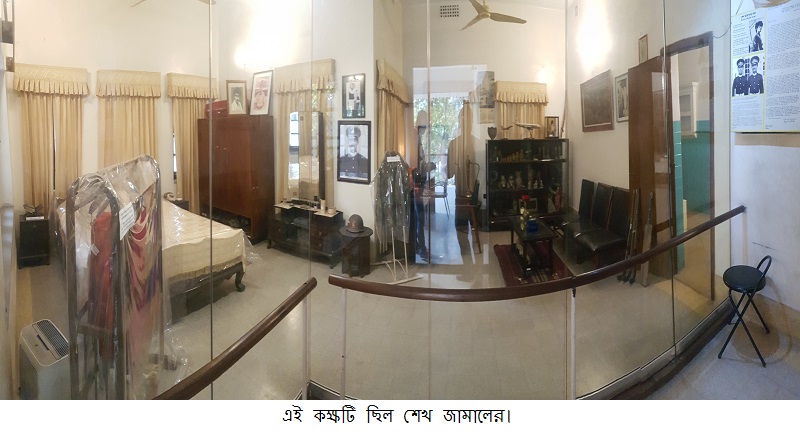 Sheikh Jamal, the middle son of Father of the Nation Bangabandhu Sheikh Mujibur Rahman was born on 28 April, 1954 in Gopalganj Tungipara. After completing his early chooling from Shaheen School, he passed secondary examination from Residential Model School. Sheikh Jamal was an armed freedom fighter. In July 1971, he was captivated life with his Mother Sheikh Fazilatunnesa Mujib in the house of 26th of 18th Street, Dhanmondi, by the Pakistani army. Then he secretly fled from home and took training from the training camp of the Liberation War at the high mountain of India's Chakrata Mountains. India's General Ovan Singh rushed to the training camp to see Sheikh Jamal, son of Bangabandhu. General Ovan Singh, seeing Sheikh Jamal, said, "I have not seen the tiger of Bengal, that is why, I have come here to see the tiger cub, Sheikh Jamal, son of Bangabandhu Sheikh Mujibur Rahman."

When he was the student of Higher Secondary level in Dhaka College, in response to the invitation of the President of Yugoslavia, Marshal Joseph Tito, he went to Yugoslavia to participate a training in their army and then received another training from the Sandhurst Army Academy in London.

Then he joined as Lieutenant in Bangladesh Army. On July 17, 1975, he was married to his paternal cousin, Parvin Jamal Roji. In this room, Sheikh Jamal lived with his newly married wife. On 15 August 1975, the killers killed both of them together in the bedroom of Bangabandhu, just after a month of their happy marriage. In the cursed night of 15th August, Jamal's room was also looted by the assailants. The numerous signs of bullets (covered with glass) on the wall, roof and floor are being displayed. Even in the bathroom mirror there are signs of bullet thrown by the killers. This room, presently, displays Sheikh Jamal's wedding nagra shoes, army uniforms, his sport equipments, sari of Rozi Jamal and their black and white photographs. 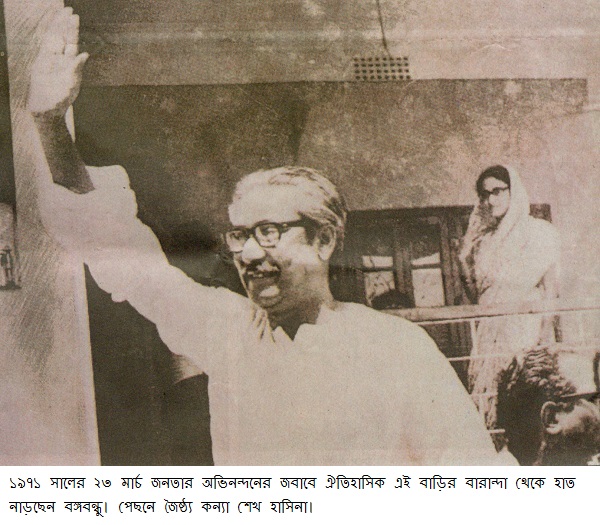