This area was located in the fields of canal, forest and low land, especially in paddy fields. There was rare existence of people here. It was such an isolated place that the barking of the foxes was heard not only at night but also in the day light. This area was almost deserted. There were few houses here. The city grew slowly. People started to come here after Bangabandhu Sheikh Mujibur Rahman’s arrival with his family in this historic house on 1 October, 1961. Every year thousands of people gathered in the front of the house in order to get guidance from their beloved leader during the successful election of the 1970, 1962 mass movement, the six round movements of 66, the mass upsurge of 69 and every subsequent movement. Bangabandhu's youngest son, Sheikh Russell used to play with their neighbor Adil Imran in front of the house and used to ride bicycles around the house. In 1971, Sheikh Kamal, the eldest son of Bangabandhu, fled from the backyard of this house jumping over the wall and participated in the liberation war. During the Liberation War, the Pakistan occupation force occupied the house for a long 11 months. Since then the house has been neglected.

On January 10, 1972, Father of the Nation Bangabandhu Sheikh Mujibur Rahman returned to his homeland as a free man from Pakistan, and in the end of February 1972, he started resettling his family in this house. From then on, the house started getting crowded with people. People were rushing to see their favorite leader in this house. On 15th August, 1975, some stray ambitious army officers and some political opponents of independence wanted to halt the house permanently through the killing of Bangabandhu and his family through ruthless murder. For long six years, the house was first captured by the killers and then the military authorities. None was allowed to enter the house let alone the members of the family. As a result, due to long negligence, the house became derelict. The house became the living place of bushes, darkness, spider net, dust, vegetation and insects.

On May 17, 1981 when Sheikh Hasina and Sheikh Rehana, daughter of Bangabandhu Sheikh Mujibur Rahman, wanted to enter the house, the military government did not allow them. Then the two helpless sisters used to cry and pray standing on the road in front of the house. However, by the grace of the almighty Allah they got back the house form the military government in 10th June 1981. After getting back the house, they decided that they would not live in this house anymore because their father was brutally killed in this house along with almost all the family members. One important thing to mention here that Bangabandhu did not live in the government house rather he lived in this house only because he loved the people of this county. For this reason on August 14, 1994, the two sisters officially announced this house as the Father of the Nation Bangabandhu Sheikh Mujibur Rahman Memorial Museum. From then onwards, thousands of visitors walk out in the courtyard of the house. 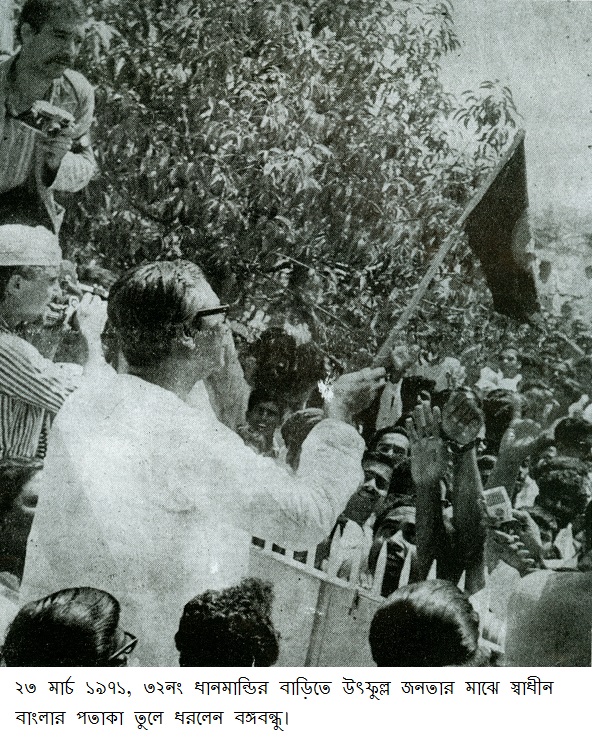 Fifty five processions belongs to various political and social organizations gathered in front of the house no 677 of Dhanmondi 32 on March 23, 1971, for the occasion of “Pakistan resistance day” declared by father of the Nation Bangabandhu Sheikh Mujibur Rahman. Chhatra League leaders officially handed over the first flag of independent Bangladesh inlaid with the golden map, the red sun and the green colors around to father of the Nation. Bangabandhu took the flag at the main gate of the residence of Dhanmondi, Road 32. He officially hoisted "The flag of independent Bengal" in his own building and took "guard of honor" by the Bangladesh Chhatra League. Then he delivered a speech to the public. He said, "Let me take charge of the action plan, demand will be mitigated. He ordered to carry on the movement. West Pakistan functionally divided with the official hoist of the flag of Bengal by Father of the Nation. And the flag of an independent country was formally born. So we can say with the words of  poet, Belal Chowdhury- “To find the history of Bangladesh and Bangalee, we should go to the house of 32.”